July 6, 1944: Jackie Robinson Refuses to Move to the Back of the Bus

Lt. Jackie Robinson got onto the military bus returning from “the colored officers club,” to Camp Hood southwest of Waco one hot Texas evening in early July and took a seat next to Virginia Jones, the wife of one of his fellow officers in the all black the 761st Tank Battalion of the U.S. Army. 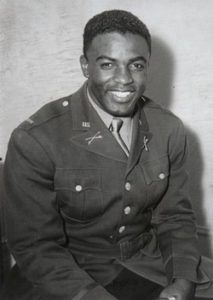 Mrs. Jones was quite light skinned, and the white bus driver thought she looked too white to have a colored soldier sit beside her. After a few blocks, the driver abruptly ordered Robinson “to move to the back of the bus.” Lt. Robinson had read that segregation was no longer allowed on military buses, and suggested that the driver just tend to his driving.

The bus driver then “asked me for my identification card. I refused to give it to him. He then went to the Dispatcher and told him something. What he told him I don’t know. He then comes back and tells the people that this nigger is making trouble.

“Look here, you son-of-a-bitch, don’t you call me no nigger!”  I told the driver to stop f—in with me, so he gets the rest of the men around there and starts blowing his top and someone calls the MP’s.”

Robinson was handcuffed and his legs were shackled and he was placed under “arrest in quarters.”

On the afternoon on August 2, the case of The United States v. 2nd Lieutenant Jack R. Robinson began.” Robinson faced two charges:
– “The first, a violation of Article of War No. 63, accused him of ‘behaving with disrespect toward Capt. Gerald M. Bear, CMP, his superior officer’ …
– The second charge was a violation of Article No. 64, in this case ‘willful disobedience of lawful command of Gerald M. Bear, CMP, his superior.’

Robinson’s Army-appointed defense attorney, Capt. William A. Cline, a white Texan, skillfully brought out inconsistencies in prosecution witnesses’ accounts, including a denial by one prosecution witness, Pfc. Ben Muckleworth, that he had used the word “nigger” in referring to Robinson when another MP had acknowledged that Muckleworth had indeed done so, and Cline managed to introduce enough evidence to strongly suggest Robinson had been consistently confronted with a racially hostile environment.

Robinson’s fate was in the hands of nine men, eight of them white, One was black. Six votes were needed for conviction.”

After a four-hour trial, Robinson was found “not guilty of all specifications and charges.’”