July 5, 1916: The Van Buren Sisters set out on a Cross-country Ride

In 1916, America was teetering on the edge of sending troops to Europe and joining in the Great War enveloping the continent. 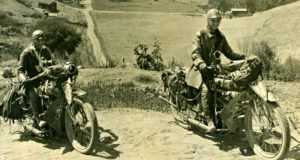 Gussie Van Buren was 24 and her sister Addie was 22 and both were active in the national Preparedness Movement and wanted to prove that women could serve as military dispatch riders freeing up men for other tasks.

Local newspapers published articles accusing the sisters of using “national preparedness” as an excellent excuse to escape their roles as housewives and “display their feminine counters in nifty khaki and leather uniforms,” but their trip was no picnic.

Gussie and Addie had to contend with poor roads, heavy rains and mud, and local police who took offence at their choice of men’s clothing. On the way they became the first women to reach the summit of Pikes Peak by motor vehicle, and finally arrived in Los Angeles on September 8.

A “Sisters Centennial Motorcycle Ride” is now underway, retracing the Van Buren’s ride across country, and all motorcycle riders are encouraged to join. The itinerary includes: