The headline in the NY Times read “Battle in Boston Streets – Calvary Charges with Sabres and Infantry with Bayonets – 3 Men Killed, Many Hurt – Gamblers, Thugs, and Thieves Operate Openly and Commit Crimes Against Women”

After years of low pay and miserable working conditions, three quarters of the Boston police force had walked off their jobs, and now 5000 National Guard troops were patrolling the streets of Boston. 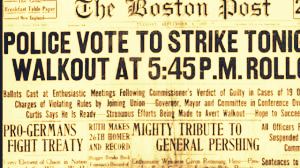 In South Boston the Guardsmen opened fire with rifles and a machine gun killing two. Scores of soldiers and civilians had received broken heads from flying bottles and stones. Others were badly beaten with clubs. Mud, sticks, bottles, paving stones were the weapons of the crowds.

In Scollay Square, before the Calvary and Infantry could clear the streets, a man was killed and a woman shot and many more hurt as the hoodlums who frequented the cheap entertainment district smashed windows and looted stores. Steel helmeted calvarymen clattered through the streets. “Keep Everybody Moving” was the order issued to the troops and they followed it to the letter.

Banks and business offices were fully lighted, and inside guards sat with rifles and automatics clasped in their hands. In every police station there was a machine gun at the ready. Millions of dollars of jewelry and securities had been removed to as far as Worcester and Springfield. In the Back Bay, the homes of the wealthy were guarded by their owners and hired men.

An armed bandit entered the Carleton lunchroom on Columbus Ave, and held up the cashier for $156.

Unprotected women were assaulted in dark corners. Two women pursued by a mob found refuge in the City Hospital. Their pursuers forced their way into the institution but were driven back by a policeman who had just brought in a man with a bullet in his head. A truck carrying 39 cases of shoes was driven away by a thief.

Harvard students who have been on the volunteer force found themselves the object of missiles. Three were charged by a mob and had to retreat to a police station after being pelted with eggs and mud.

Mayor Peters had dithered about trying to raise a volunteer replacement force, but Governor Calvin Coolidge had called out the Guard and informed Mayor Peters that he was prepared the ask the President to send in the Army to supplement the Guard if need be.

The striking police were dismissed by Police Commissioner Curtis, who then hired 1,574 replacement police officers from a pool of unemployed World War I veterans. When the new hires reported for duty, they had to report for work in civilian clothing; members of the United Garment Workers refused to sew uniforms for the scabs.