Egyptian President Anwar Sadat was assassinated on October 6, 1981. President Reagan, who had survived his own assassination attempt just six months earlier, decided the risk was too great for him to attend Sadat’s funeral. Instead he asked the three former presidents to serve as the American delegation.

The New York Times reported their gathering before embarking on their mission:

The former Presidents, along with Mr. Carter’s wife, Rosalynn, arrived at the White House at 6:52 P.M. They were met by Mr. and Mrs. Reagan and by several hundred White House employees who burst into applause as Mr. Carter stepped from the helicopter with a salute to the Marine guard. The applause mounted when Mr. Ford and finally Mr. Nixon deplaned, as each of them had many times in their Presidencies.

Over cocktails in the Blue Room, according to a White House spokesman, Mr. Ford and Mr. Nixon told Mr. Reagan that he was wise not to go to Cairo.

Mr. Reagan, lifting his glass in a toast to his three predecessors, said, ”Ordinarily, I would wish you happy landing, but you’re all Navy
men so I wish you bon voyage.” 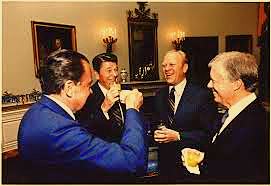 Standing in a circle that also included Vice President Bush, the five men talked of Mr. Sadat and paid tribute to his memory. Later, just after darkness fell, they returned to the South Lawn, followed by Mrs. Carter in a dark raincoat and Mrs. Reagan in a bright red one.

As the former Presidents listened in silence, Mr. Reagan thanked them for undertaking the mission of representing the United States at the funeral, then spoke again of Mr. Sadat. At the end of the tribute, Mr. Reagan’s eyes appeared to glisten with tears. ”Anwar Sadat, a man of peace in a time of violence, understood his age,” Mr. Reagan said. ”In his final moments, he, as he had all during his days, stood in defiance of the enemies of peace, the enemies of humanity.”

Then, addressing those he called enemies of peace ”who rejoice in the death of Anwar Sadat,” Mr. Reagan added: ”In life, you feared Anwar Sadat, but in death you must fear him more. For the memory of this good and brave man will vanquish you. The meaning of his life and the cause for which he stood will endure and triumph.”