Before 1920, publishers were known to publish an occasional book for boys and girls, but no publishers had “Children’s Book” departments per se. A few hundred children’s books might be published each year, but the costs for printing illustrated books in color was still high and the market was not well defined. 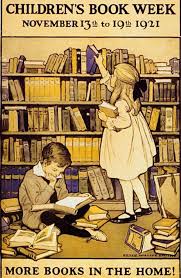 Franklin K. Matthiews, the librarian of the Boy Scouts of America, had been touring the country, working to promote higher standards in children’s books. He joined forces with Frederic G. Melcher, the influential editor of Publishers Weekly, and Anne Carroll Moore, the Superintendent of Children’s Works at the New York Public Library to convince the American Booksellers Association and the American Library Association to sponsor a “Good Book Week” along with the Boy Scouts of America.

Still running every year (although in 2008 it moved from November to May) Children’s Book Week is the longest-running national literacy initiative in the country. Every year, events are held at schools, libraries, bookstores, and homes throughout the country celebrating the hundreds of thousands of children’s books published, read and enjoyed every year.

Matthiew’s would publish his compilation “The Boyscouts’ Book of Campfire Stories” in 1921.

Melcher established the Newbery Medal in 1922 to award “the most distinguished book for children” and the Caldecott Medal in 1937 to honor children’s picture books.

Books read in childhood have a way of staying with us throughout our lives. Some of the books published in 1919 – the stories of Anne of Green Gables, the Magic of Oz, and Tarzan the Untamed – still resonate with us 95 years later, and even in this digital age Frederic Melcher’s declaration: “A great nation is a reading nation” remains as true today as ever.