Clifford Holland was 36 years old in 1919 when he was appointed chief engineer of the new tunnel project under the Hudson River, but he had already designed four subway tunnels under the East River. 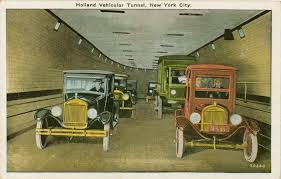 Plans for the Hudson River crossing began in 1906 with the appointment of commissions in New York and New Jersey to construct bridges connecting the states. Initial proposals called for a bridge from Canal Street in Manhattan to 13th Street in Jersey City, but a bridge was found not practical due to the long span required to cross the Hudson, the deep foundations needed to reach bedrock, and the lengthy approaches which would require large purchases of real estate.

Eleven different plans for a tunnel were then proposed. Holland’s plan for twin tubes lined with cast iron, each containing two lanes of motor vehicle traffic on a single deck, was ultimately selected.

Holland concluded that the ventilation system would need to keep carbon monoxide below four parts per 10,000. Ventilation systems used in railroad tunnels blew fresh air from one portal to the other, but with vehicular traffic 70 mph winds would be needed to clear the tunnel of fumes. Instead, Holland devised a system in which clean air would be supplied throughout the tunnel through a fresh air duct located below the roadway with openings at regular intervals. An exhaust duct above the roadway with openings at regular intervals would remove the exhaust fumes out of the tunnel. Thus, air would be drawn straight up within the tunnel, which would also confine the spread of flames in the event of a fire.

A 400-foot long large-scale model of the tunnel was constructed near Pittsburgh to evaluate the proposal. In the final design 84 fans in four ventilation buildings powered by electric motors with an output of 6,000 horsepower can completely change the air inside the tunnel every 90 seconds.

Construction of the “Hudson River Vehicular Tunnel” began in 1922 at the foot of Canal Street. Clifford Holland was ever present on the construction site – even as a teenager he had told his classmates he wanted to be “a tunnel man” and this was his life’s work. The tunnel was dug 94 feet below the surface through the silted riverbed using six immense shields, each a large cylinder driven by 30 hydraulic jacks. Compressed air pressurized the interior of the shields to keep out the water and muck; after segments of the tubes were excavated, thick cast iron rings were added to support the walls.

Five years into the project, having spent countless hours working at his desk and in the compressed air of the tubes, chief engineer Clifford Holland suffered a nervous breakdown. He was sent to a sanitarium in Battle Creek, Michigan for rest. On October 27, 1924, Holland died of a heart attack. He was 41.

Two days later the two ends of the tubes from New York and New Jersey were joined together; thanks to Holland’s precise calculations the two sections met within a fraction of an inch. Shortly thereafter, the New York State Bridge and Tunnel Commission and the New Jersey Interstate Bridge and Tunnel Commission resolved that the “Hudson River Vehicular Tunnel” be dedicated to the memory of Clifford Milburn Holland, and that the Tunnel be named as “The Holland Tunnel”.

The Holland Tunnel formally opened on November 12, 1927. Twenty thousand people walked through the tunnel and viewed the engineering marvel before it opened to vehicles at midnight. The first car to enter the Holland Tunnel from Manhattan carried chairmen of the New York State Bridge and Tunnel Commission and the widow of Clifford Holland.

Once described as the “Eighth Wonder of the World,” at two and a half miles it was the longest underwater vehicular tunnel, the first tunnel constructed with a ventilation system designed to handle automobile and truck exhaust fumes, and had the largest tube width—twin tubes at 29.5 feet in diameter, and set the standard for other vehicular tunnels that followed throughout the world.

The Holland Tunnel remains one of the few major engineering works named after its engineer.