1876: Buffalo Calf Road Woman rallies the Cheyenne at the Battle of the Rosebud. 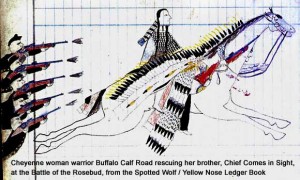 During the Battle of the Rosebud, the Cheyenne and Lakota, allied under the leadership of Crazy Horse, were retreating under the assault of General George Crook’s expeditionary forces, when  the warrior Comes in Sight found himself knocked from his horse during a retreat.

Suddenly his sister,  Buffalo Calf Road Woman, who had been watching from a distance, galloped at full speed onto the battlefield and grabbed up her wounded brother. Her courageous rescue inspired the Cheyenne forces and they rallied to defeat Crook and his cavalry. In honor of her courageous action the Cheyenne call the Battle of Rosebud “The Fight Where the Girl Saved Her Brother”.

The battle was part of the Great Sioux War that arose after the Lakota and their northern Cheyenne allies had won as a reservation the Black Hills and a large territory in what is now Montana and Wyoming in the Treaty of Fort Laramie (1868). In 1874 the Custer Expedition discovered gold in the Black Hills, which prompted the U.S. to desire to buy the territory from the Indians. The U.S. ordered the Lakota and Cheyenne to come to the agencies on the reservation by January 31, 1876 to negotiate the sale. A few bands did not comply and when the deadline passed General Crook undertook to force Sitting Bull, Crazy Horse, and their followers onto the reservation.

Buffalo Calf Road Woman went on to fight next to her husband in the Battle of the Little Bighorn eight days later.