Rosa Parks remembered when she was just a child going to elementary school, how she would watch the school buses take white students to their new school, while she and her fellow black students had to walk to theirs.

“I’d see the bus pass every day… But to me, that was a way of life; we had no choice but to accept what was the custom. The bus was among the first ways I realized there was a black world and a white world… I did a lot of walking in Montgomery.” 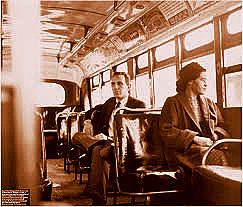 One day in 1943, Parks boarded a Montgomery Transit bus and paid the fare. When she went to take her seat, the driver told her to follow city rules and to enter the bus again from the back door. Parks complied and exited the bus to re-board at the rear, but before she was back aboard, the bus sped off, leaving her to walk home in the rain.Twelve years later, around 6 p.m. on Thursday, December 1, 1955 after working all day, Rosa Parks boarded the Cleveland Avenue bus in downtown Montgomery. She paid her fare and sat in an empty seat she found in the first row of back seats reserved for the “colored” section. Her row was near the middle of the bus, directly behind the ten seats reserved for white passengers.As the bus traveled along its regular route, the white-only seats in the bus started to fill up. When the bus reached its third stop in front of the Empire Theater, several more passengers boarded. The bus driver noted that white passengers were now standing, so he got up and moved the “colored” section sign back a row and requested the four people in that row to give up their seats so that the white passengers could sit: “Y’all better make it light on yourselves and let me have those seats.”

Rosa Parks remembered what happened next: “We didn’t move at the beginning, but he says, ‘Let me have these seats.’”

The other three people moved back, but Parks just moved toward the window seat.

The driver said, “Why don’t you stand up?”

“I don’t think I should have to stand up.”

“’Well, if you don’t stand up, I’m going to have to call the police and have you arrested.”

As the officer took her away, Rosa asked, “Why do you push us around?”

Rosa Parks later recalled: “When that white driver stepped back toward us, when he waved his hand and ordered us up and out of our seats, I felt a determination cover my body like a quilt on a winter night.

“I only knew that, as I was being arrested, that it was the very last time that I would ever ride in humiliation of this kind…

“I did not want to be mistreated, I did not want to be deprived of a seat that I had paid for. It was just time… I had not planned to get arrested. I had plenty to do without having to end up in jail. But when I had to face that decision, I didn’t hesitate to do so because I felt that we had endured that too long.

“People always say that I didn’t give up my seat because I was tired, but that isn’t true. I was not tired physically, or no more tired than I usually was at the end of a working day. I was not old, although some people have an image of me as being old then. I was forty-two. No, the only tired I was, was tired of giving in.”