On a blustery December morning in 1888, two cowboys from Mancos, Colorado, were riding across the mesa southwest of their ranch, looking for stray cattle. At the edge of the pinyon and juniper forest, as blowing snow swirled about them, Richard Wetherill and his brother-in-law Charlie Mason gazed across a canyon and saw something they had never seen before. 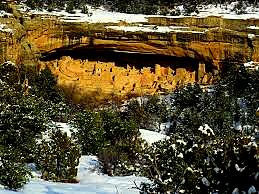 Wetherill could see massive rectangular buildings, two towers, and an archway. “It looks just like a palace,” Mason whispered.

“The journey to the Mesa Verde … is now a very easy one, and the railway runs within thirty miles of the mesa. You leave Denver in the evening, over the Denver & Rio Grande. From the time when your train crawls out of La Veta pass at about 4 in the morning, until you reach Durango at nightfall, there is not a dull moment. All day you are among high mountains, swinging back and forth between Colorado and New Mexico, with the Sangre de Cristo and the Culebra ranges always in sight until you cross the continental divide at Cumbres and begin the wild scurry down the westward slope…

ANY approach to the Mesa Verde is impressive, but one must always think with envy of the entrada of Richard Wetherill, the first white man who discovered the ruins in its canons forty-odd years ago. Until that time the mesa was entirely unexplored, and was known only as a troublesome place into which cattle wandered off, and from which they never came back. All the country about it was open range. The Wetherills had a ranch west of Mancos. One December day a boy brought word to the ranch house that a bunch of cattle had got away and gone up into the mesa. The same thing had happened before, and young Richard Wetherill said that this time he was going after his beasts. He rode off with one of his cow men and they entered the mesa by a deep canon from the Mancos river, which flows at its base. They followed the canon toward the heart of the mesa until they could go no farther with horses. They tied their mounts and went on foot up a side canon, now called Cliff canon. After a long stretch of hard climbing young Wetherill happened to glance up at the great cliffs above him, and there, thru a veil of lightly falling snow, he saw practically as it stands today and as it had stood for 800 years before, the cliff palace—not a cliff dwelling, but a cliff village; houses, courts, terraces and towers, a place large enough to house 300 people, lying in a natural archway let back into the cliff. It stood as if it had been deserted yesterday; undisturbed and undesecrated, preserved by the dry atmosphere and by its great inacessibility.

That is what the Mesa Verde means; its ruins are the highest achievement of stone-age man—preserved in bright, dry sunshine, like a fly in amber—sheltered by great canon walls and hidden away in a difficult mesa into which no one had ever found a trail. When Wetherill rode in after his cattle no later civilization blurred the outlines there. Life had been extinct upon the mesa since the days of the Cliff Dwellers. Not only their buildings, but their pottery, linen cloth, feather cloth, sandals, stone and bone tools, dried pumpkins, corn and onions, remained as they had been left. There were even a few well-preserved mummies—not many, for the cliff dwellers cremated their dead.

ALTHO only three groups of buildings have been excavated and made easily accessible to travelers, there are ruins everywhere—perched about like swallows’ nests. The whole mesa, indeed, is one vast ruin. Eight hundred years ago the mesa was hung with villages, as the hills above Amalfi are today. There must have been about 10,000 people living there. The villages were all built back in these gracious natural arches in the cliffs; with such an outlook, such a setting as men have never found for their dwellings anywhere else in the world. The architecture is like that of most southern countries—of Palestine, northern Africa, southern Spain—absolutely harmonious with its site and setting. On the way from New York to the Montezuma valley one goes thru hundreds of ugly little American towns, but when you once reach the mesa, all that is behind you. The stone villages in the cliff arches are a successful evasion of ugliness—perhaps an indolent evasion. Color, simplicity, space, an absence of clutter, the houses of the Pueblo Indians today and of their ancestors on the Mesa Verde are a reproach to the messiness in which we live.”