I wasn’t yet ten years old, but I vividly remember watching the big black and white television in the upstairs room of our house in Bethlehem, Pennsylvania, as the parade and ceremony and speeches were broadcast from the District of Columbia. A big storm had just cleared out and snow banks lined streets. Was it a snow day, or did school close for the Inauguration?

Even on a black and white set, anyone watching could tell that the day was crisp and cold and bright in Washington as 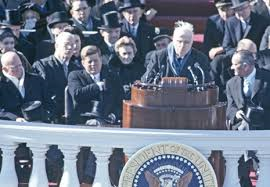 And even at my young age I could sense that we had arrived on the cusp of a new era. The men on the podium wore great morning coats and top hats! That seemed a curious nod to the past in this moment for youth, for bareheaded men and women with radiant smiles and for music and art and lofty rhetoric.

Everyone was bundled against the cold. An elderly man approached the podium; my mothered said it was Robert Frost. And then came an awkward moment. The old poet’s papers flickered and shimmered in the bright fresh breeze. Lyndon President Johnson held out his top hat in an attempt to shield the papers from the glare of the snow and the sun, but the crusty poet clearly couldn’t see.

He stowed his new “Dedication” manuscript. Instead, he pulled an old poem from memory, a poem he referred to as “a history of the United States in a dozen [actually, sixteen] lines of blank verse.”

The land was ours before we were the land’s.
She was our land more than a hundred years
Before we were her people. She was ours
In Massachusetts, in Virginia,
But we were England’s, still colonials,
Possessing what we still were unpossessed by,
Possessed by what we now no more possessed.
Something we were withholding made us weak
Until we found out that it was ourselves
We were withholding from our land of living,
And forthwith found salvation in surrender.
Such as we were we gave ourselves outright
(The deed of gift was many deeds of war)
To the land vaguely realizing westward,
But still unstoried, artless, unenhanced,
Such as she was, such as she would become.