When William Henry Harrison, the hero of Tippecanoe, came to Washington as President-elect, he wanted to show that he was a learned and thoughtful man, and not the backwoods caricature he had been made out to be in the campaign, but he also wanted all to know that he was a man of the people. 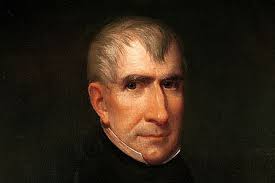 The day of his inauguration dawned cold and wet, and Harrison rode on horseback to the ceremony without a coat or a hat, rather than in the closed carriage that had been offered him.

He had asked his friend Daniel Webster to edit down his inaugural address, which was replete with classical allusions. Webster, who understood some of the limits of oration, boasted that he had killed “seventeen Roman proconsuls as dead as smelts, every one of them.” Even so, at 8,445 words, it was the longest inaugural address ever delivered, and it took Harrison nearly two hours to read it to his frozen audience. Afterwards, he rode to the White House in the inaugural parade, and that evening attended three inaugural balls.

Within a few days Harrison became ill with a cold. The cold worsened, rapidly turning to pneumonia and pleurisy. He sought rest in the White House, but could not find a quiet room because of the steady crowd of office seekers.

Doctors were called in. They applied heated suction cups to try to draw out the disease; they tried enemas and prescribed opium, castor oil, leeches and Virginia snakeweed. As a last resort, a number of Native American “remedies” were tried, including one involving the use of live snakes.

The remedies did not work, Thirty days, twelve hours, and thirty minutes after taking the oath of office, President William Henry Harrison was dead.