March 5, 1770: Captain Preston and his Troops are assaulted in Boston

John Adams called the crowd “a motley rabble of saucy boys, negros and molattoes, Irish Teague’s and outlandish Jack Tarrs.”  Captain Thomas Preston just called it a mob. He was in command of the British Soldiers that cold March evening, and this is his account of the events that came to be called “The Boston Massacre”:

“The mob still increased and were outrageous, striking their clubs or bludgeons one against another, and calling out 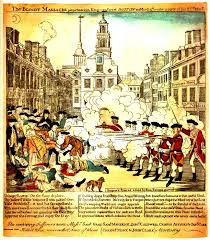 “Come on you rascals, you bloody backs, you lobster scoundrels, fire if you dare, God damn you, fire and be damned, we know you dare not”, and much more such language was used. At this time I was between the soldiers and the mob, parleying with and endeavouring all in my power to persuade them to retire peaceably, but to no purpose.

They advanced to the points of the bayonets, struck some of them and even the muzzles of the pieces, and seemed to be endeavouring to close with the soldiers. On which some well behaved persons asked me if the guns were charged. I replied yes. They then asked me if I intended to order the men to fire. I answered no, by no means, observing to them that I was advanced before the muzzles of the men’s pieces, and must fall a sacrifice if they fired; that the soldiers were upon the half cock and charged bayonets, and my giving the word fire under those circumstances would prove me to be no officer.

While I was thus speaking one of the soldiers, having received a severe blow with a stick, stepped a little to one side and instantly fired… On this a general attack was made on the men by a great number of heavy clubs and snowballs being thrown at them, by which all our lives were in imminent danger… some persons at the same time from behind calling out “Damn your bloods, why don’t you fire”. Instantly three or four of the soldiers fired… On my asking the soldiers why they fired without orders, they said they heard the word ‘fire’ and supposed it came from me. This might be the case as many of the mob called out fire, fire, but I assured the men that I gave no such order… that my words were “don’t fire, stop your firing”…”