“Be it known that I, Abraham Lincoln, of Springfield, in the County of Sangamon, in the State of Illinois, have invented a new and improved manner of combining adjustable buoyant air chambers with a steamboat or other vessel for the purpose of enabling their draught of water to be readily lessened to enable them to pass over bars, or through shallow water, without discharging their cargoes; and I do hereby declare the following to be a full, clear, and exact description thereof, reference being had to the accompanying drawings making a part of this specification.” 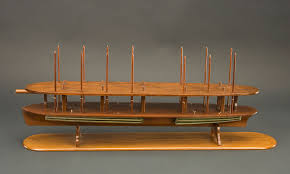 When Abe Lincoln was a young man he twice helped take flatboats from his home in Indiana down the Ohio and Mississippi Rivers to New Orleans.   During his brief experience as a ferryman, Lincoln found himself stranded twice on riverboats that had run aground on shoals. Abe thought there might be a better way to extricate vessels from such difficulties, and envisioned a system of waterproof fabric bladders that could be inflated when necessary to help ease a stuck ship over such obstacles. When crew members knew their ship was stuck, or at risk of hitting a shallow, Lincoln’s invention could be activated, which would inflate the air chambers along the bottom of the watercraft to lift it above the water’s surface, providing enough clearance to avoid a disaster. His invention would be attached to the sides of a boat. They could be lowered into the water and inflated to lift the boat over obstructions in the water.

Patent No. 6,469 was awarded to the future president on May 22, 1849. The scale patent model which Abe whittled is on display at the Smithsonian Institute.