It seemed that spring was finally on its way to Boston. The winter had been very mild and weather had warmed up nicely for several days, and crocuses were starting to pop up in the Public Garden.

The evening of March 11th a gentle rain began to fall. Then it started to pour. By early the next morning the rain turned 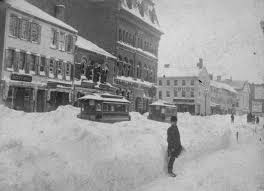 to snow, and then it proceeded to snow heavier and heavier. By evening whiteout conditions brought life to a standstill in Boston and monster waves battered the coastline.

As the storm stalled off Rhode Island, a blizzard raged across New England as it continued to snow and snow and snow. For four days it snowed – fifty inches of snow fell in Connecticut and Massachusetts and forty inches covered New York and New Jersey, and the hurricane force winds blew it into drifts up to 50 feet high. The snow reached the second floor of many buildings; in some place only chimneys were visible.

As the winds blew and the snow fell the temperatures dropped into the single digits. Men and women with factory jobs tried desperately to make it to work so they wouldn’t miss out on their wages. In North Adams, a millworker on his way home was found just a short distance from the mill, stuck in a drift on Main Street, frozen to death. The local newspaper reported that the wind was so loud that it drowned out his cries for help.

Men living in the suburbs took the streetcar to work in the morning, but the trip home was a life-and-death struggle. The rapid accumulation of snow and drifts immobilized railroad cars. Passengers and crewmen were stranded without food, water, or heat. Passengers trapped in stranded railroad cars burned the seats and other wooden components to stave off the cold.

Telegraph poles snapped under the force of the wind and snow. The headline “CUT OFF!” appeared on front pages. Horse-drawn omnibuses and streetcars were quickly abandoned in the drifting snow. Snowplows drawn by teams of horses tried to clear the main streets, only to block the side streets and sidewalks. People were found a week later in snow drifts.

Two hundred ships were grounded, and at least one hundred sailors died. Fires broke out but the fire stations were immobilized. All told, the storm was responsible for as many as 1,000 deaths along the east coast.