Coming off a year which saw the Boston Braves finish 31 ½ games out, the 1914 season looked to be a repeat. The Braves lost the opening two games to Brooklyn (8-2 and 5-0), and then plunged right to the bottom of the standings, losing 14 of their next 17 outings. By July 15th, with the season half over, the Braves were solidly in last place, 11 ½ games behind the first-place New York Giants. 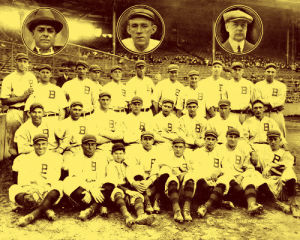 James Gaffney owned the hapless team. Operating out of the smallest park in the major leagues, he was lucky to draw a few thousand fans to a game. He tried to spiff up the old South End Grounds and brought in George Tweedy Stallings, a Georgia boy, as manager.

After watching the Braves punt a doubleheader, Stallings was appalled, “It is a baseball horror”. Even when the Braves acquired Johnny Evers from the Cubs, Stallings admitted that the roster was at best “one .300 hitter, the worst outfield that ever flirted with sudden death, three pitchers, and a good working combination around second base.”

Gaffney was dismayed. After the club dropped another doubleheader, he told the club secretary “Say, when you see Stallings tell him to take that ball club and dump it in the ocean.” On July 7, the Braves played an exhibition game against the minor league Buffalo Bisons; they got trounced, 10-2. “Big league ballplayers you call yourselves, eh?” Stallings fumed as they boarded the train. “You’re not even Grade A sandlotters. I’m ashamed of you all.”

The players were downcast and embarrassed. “Can you play better ball than you have been playing?” Maranville asked Evers at a clubhouse meeting. “Yes, I think I can,” Evers replied. The teammates looked each other in the eye, asked the same question, and acknowledged that they could too.

Something clicked. The club took three of four from the Cubs, split four with the Cardinals, and took three from the Reds and four of five from the Pirates. They won nine in a row at home and began making up ground. “It wasn’t until the first of August that we thought we had a chance,” said Fred Mitchell “and then we didn’t talk about it.”

Their manager didn’t talk about it either. Stallings hadn’t shown signs of obsessions while his club was losing, but now that they were winning…. When he was walking to the ballpark one day he stopped for a piece of lemon meringue pie and it was so good that he had a second piece. The Braves won that day, so he had to order two pieces of lemon meringue every day. If one of his players got a hit, Stallings would freeze in place. Once, when a 10-hit rally began, he was reaching down to pick up a peanut shell, Stallings stayed bent over for so long that his players had to carry him out of the dugout.

Stallings tinkered with his outfield — he used 8 starters in left, 8 in center, and 11 in right. The pitching rotation of Bill James, Dick Rudolph, and Lefty Tyler started making hay. The Braves turned into a different team and went 61-16 over the second half of the season.

When they swept the Giants in mid-August, the Boston Globe proclaimed “Stallings, Worker of Miracles,” above a feature on the straw-hatted skipper, who wore a suit and bowtie on the bench. Boston drew even with New York and then they took the lead. As they started selling out stadiums, the Red Sox owner Joe Lannin offered them the use of his new Fenway Park.

The Braves could have filled two Fenway Parks for the Labor Day doubleheader with the Giants, which drew over 74,000 fans. “The overjoyed fans began throwing their straw hats in all directions,” reported the Globe after the Braves won the opener in the ninth. When Boston took the finale, 8-3, and pitcher George Davis, a Harvard Law School student, no-hit the Phillies the next day the momentum was unstoppable. “The Braves will win all right,” Connie Mack predicted. “Any team that can do what they have done in the last six or seven weeks will grab the National League pennant.”

The Braves clinched it at home against the Cubs. “I suppose that I have called you fellows a lot of hard names at various times during the season. I may have said that you were fatheads, boneheads, ivory tops, feather brains, and other things of that sort. Well, those names don’t go. You’re not any of those things I’ve called you. I’m not going to use any of those names again,” Stallings told his players, “At least until the World’s Series.”