I observe with particular pleasure the view you have taken of the immunity of Religion from civil jurisdiction, in every 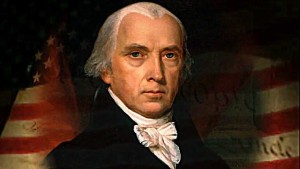 case where it does not trespass on private rights or the public peace. This has always been a favorite principle with me; and it was not with my approbation, that the deviation from it took place in Congress, when they appointed Chaplains, to be paid from the National Treasury. It would have been a much better proof to their Constituents of their pious feeling if the members had contributed for the purpose, a pittance from their own pockets. As the precedent is not likely to be rescinded, the best that can now be done, may be to apply to the Constitution the maxim of the law, de minimis non curat.

There has been another deviation from the strict principle in the Executive Proclamations of fasts & festivals, so far, at least, as they have spoken the language of injunction, or have lost sight of the equality of all religious sects in the eye of the Constitution.

Whilst I was honored with the Executive Trust I found it necessary on more than one occasion to follow the example of predecessors. But I was always careful to make the Proclamations absolutely indiscriminate, and merely recommendatory; or rather mere designations of a day, on which all who thought proper might unite in consecrating it to religious purposes, according to their own faith & forms.

In this sense, I presume you reserve to the Govt. a right to appoint particular days for religious worship throughout the State, without any penal sanction enforcing the worship. I know not what may be the way of thinking on this subject in Louisiana. I should suppose the Catholic portion of the people, at least, as a small & even unpopular sect in the U. S., would rally, as they did in Virginia, when religious liberty was a Legislative topic, to its broadest principle.

Notwithstanding the general progress made within the two last centuries in favor of this branch of liberty, & the full establishment of it, in some parts of our Country, there remains in others a strong bias towards the old error, that without some sort of alliance or coalition between Government & Religion neither can be duly supported. Such indeed is the tendency to such a coalition, and such its corrupting influence on both the parties, that the danger cannot be too carefully guarded against. And in a Government of opinion, like ours, the only effectual guard must be found in the soundness and stability of the general opinion on the subject.

Every new & successful example therefore of a perfect separation between ecclesiastical and civil matters, is of importance. And I have no doubt that every new example, will succeed, as every past one has done, in shewing that religion & Govt. will both exist in greater purity, the less they are mixed together.

The example of Holland proved that a toleration of sects, dissenting from the established sect, was safe & even useful. The example of the Colonies, now States, which rejected religious establishments altogether, proved that all Sects might be safely & advantageously put on a footing of equal & entire freedom; and a continuance of their example since the declaration of Independence, has shown that its success in Colonies was not to be ascribed to their connection with the parent Country.

If a further confirmation of the truth could be wanted, it is to be found in the examples furnished by the States, which have abolished their religious establishments. I cannot speak particularly of any of the cases excepting that of Virginia where it is impossible to deny that Religion prevails with more zeal, and a more exemplary priesthood than it ever did when established and patronized by Public authority.

We are teaching the world the great truth that Governments do better without Kings & Nobles than with them. The merit will be doubled by the other lesson that Religion flourishes in greater purity, without than with the aid of Government.